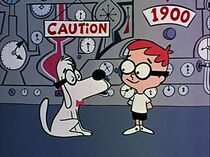 Peabody's Improbably History is a series of segments in late 50's to early 60's TV shows Rocky and His Friends and The Bullwinkle Show, created by Ted Key and produced by Jay Ward. It follows intelligent dog Mr. Peabody and his "pet boy" Sherman as they travel through time and give new reasons to iconic events in history.

Peabody brews a mixture of poisons that would help Giovanni Sforza "eat and drink quite freely" and become immune to poisons. He gains weight in an instant after eating a single turkey.

After being exiled from Italy forever, Sherman and Galileo enter and win a spaghetti eating contest to become honorary citizens and return.

To escape the pursuing French sentries, Peabody and Duke Wellington throw out hay for their horses to eat.