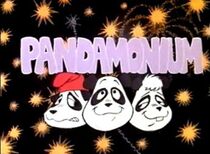 Pandamonium is a short-lived animated television series that aired from September 18 to December 11, 1982 on CBS. The series involves the adventures of a trio of pandas (Chesty, Timothy and Algernon) and two siblings, Peter and Peggy Darrow, on a quest to find the pieces of the Pyramid of Power, an artifact sought by the evil Mondraggor and what gave the pandas their powers.

When the group sets up camp, Timothy attempts to blow up an inflatable mattress only for it to blow back into him.