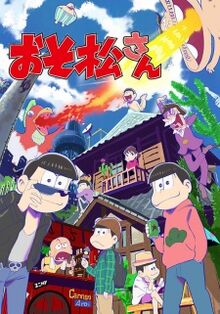 Osomatsu-kun is a comedy manga series that began in 1962 and ran 34 volumes until 1969 in a variety of magazines.

It was adapted into several anime TV series. The first ran 60 episodes from 1966-7. The second 88 episodes from 1988-9, which also received the film "Suika no Hoshi Kara Konnichiwa Plaisance!" during its run.

The sextuplets eat all of the family's dinner before their father arrives, leaving him with nothing.

Chibita's Head is the Best in the World (Issue #49)[edit]

Karamatsu stays at home and eats his family's entire supply of rice, and is then strung up into a tree by Chibita who thinks he is Osomatsu.

An unkown brother (possibly Karamatsu or Jyushimatsu) stuffs himself with rice alongside Ichimatsu, who is serving it.

A brief scene during the opening has the sextuplets appearing deflated before Totoko inflates them, their bursting transitioning to the next scene.

We flash forward to a possible future where the Matsuno brothers are immensely popular, and have become overweight (minus Ichimatsu, who is as skinny as a zombie) from being so wealthy.

Karamatsu chugs a bottle of beer, bloating up quickly, and sprays it out of his nipples at Jyushimatsu during the NEETs' collective attempt to achieve fame through internet videos.

Iyami faces hard times and decides to mooch off the sextuplets while their parents aren't home. He gladly cooks and eats a bunch of garbage around the house, which goes right through him. He chases them around while refusing to use their toilet.

Jyushimatsu pats his swollen belly to use Todomatsu during his attack sequence, referring to the fact that Jyushimatsu did indeed slurp him up in the episode the unit hails from.

Ichimatsu swells up to massive proportions from eating way too much cake, and ends up vomiting.

Osomatsu, dressed as Snow White, fattens up on apples.

Jyushimatsu's attack for this unit involves Homura "helping" him win an eating competition.

18 Year old Osomatsu Stuffs himself as part of his attack animation.

Among a Collection of keychains where the NEETs are dressed as various fairytale characters, Jyushimatsu plays the part of Snow White, stuffed with apples.

Jyushimnatsu enters a sleeping Osomatsu's dream where he's stuffing himself.