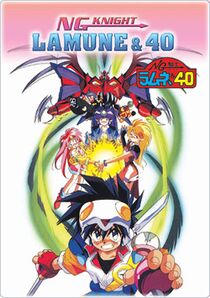 NG Knight Ramune & 40 is an anime series directed by Hiroshi Negishi that ran from April 1990 to January 1991, followed by three OVA series and a sequel series, VS Knight Ramune & 40 Fire. The premise revolves around Ramune, a boy obsessed with video games who is told by a young princess named Milk that he is related to Ramuness, and so is taken into the world of the video game she sold him to defend it from Don Harumage.

Milk has eaten all the food on the ship. She does it again at the end of the episode.

Milk is woken up by a buffet, but goes back to sleep after she eats it all.