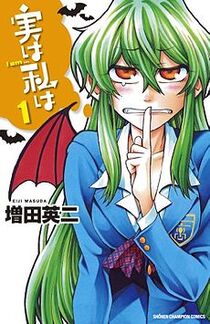 My Monster Secret is the North American dub title of Jitsu wa Watashi wa (Actually, I am...), a manga series created by Eiji Masuda. It also gained a 13-episode anime adaptation. The story follows Asahi Kuromine, a high school boy who has trouble keeping secrets. He discovers that his crush, Yōko Shiragami, is really a vampire, and her father will remove her from the school if anyone found out. Asahi swears to keep this secret, but it is made more difficult by his childhood friend Mikan Akemi, as well as other supernatural beings at school.

The commercial bumper depicts Akane eating a bunch of snacks, much to Akari's frustration.