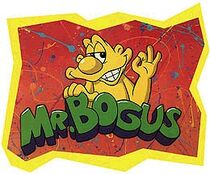 Mr. Bogus is a 2D animated cartoon series created by Peter Keefe based on the French/Belgian claymation short series Bogus; 42 out of the 300 of them are used as special segments. It aired from September 1991 to November 1993.

The show is about a small, yellow creature from a bizarre place named Bogusland that lives in the walls of a suburban home where a young boy named Tommy Anybody resides. Mischevious and gluttonous, Bogus tends to cause problems, solve them, or both.

Mr. Bogus is on the run from a poodle and climbs into a vending machine. When he has eaten all the food in the machine, it gets blamed on the poodle despite Bogus' swollen belly.

Bogus is trying to look after a relative of his, Brattus, who causes trouble. At one point, Brattus makes a mess in the kitchen and eats a tall sandwich he created in one bite, resulting in a bloated stomach until seeing Bogus arrive.

At the beach, Bogus sees Brattus and a dog having a tug-of-war over a sausage link. When Bogus and Brattus only get one sausage and the dog eats the rest, Brattus cries so Bogus cheers him up by stuffing a sausage into his mouth. He ends up bloated, and this happens again when he pigs out on beach food and swiftly eats a whole cake shortly afterwards.

Tommy walks up to a girl who is standing at an ice cream van. Unfortunately, Bogus is in his pocket and steals all five scoops the girl ordered, scaring her away as he rubs his belly.

In a claymation segment, Bogus grows big and bloated when he takes some dehydrated food tablets out of a container and drinks some water out of a vial.

Bogus dreams about juggling and eating ice cream cones before being interrupted by a baby of whom a babysitter has been hired to take care of. Later, the baby wants a cheeseburger and pizza that the babysitter had set out but Bogus eats them all, letting his belly flop afterwards and saying, "That's life!" Later still, he bloats up again after cooling his mouth down from chili peppers.

Bogus is seen at one point sitting on a tall sandwich, bloating up after eating the second layer.

In a claymation segment, Bogus puts his finger in a tube to stop it from making a hissing sound, but this blows him up like a balloon.

Bogus stuffs himself when sucking up a spaghetti strand on Tommy's fork as they watch a monster movie on TV.

Bogus gains a big belly at the beginning after eating some pizza and burping and hiccuping at the same time.