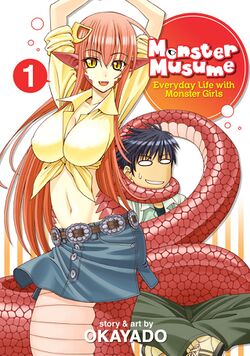 Monster Musume (Monster Musume no Iru Nichijō) is a manga series created by Takemaru "Okayado" Inui, running since 2012. An anime adaptation titled Everyday Life with Monster Girls ran in 2015. Three years ago, the government revealed that mythical creatures are real. A cultural exchange program was enacted to help integrate the societies of humans and monsters. Kimihito Kurusu gets dragged into the program when a lamia named Miia is brought to his house by mistake. Other creatures end up living with him as well, and he has to deal with their adjustment to human society and their advances toward him.

The Feminine Wiles of the Monster Girls (Volume 1, Chapter 7)[edit]