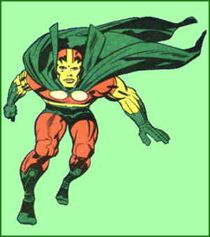 Mister Miracle is a DC Comics superhero with an affialation to the Justice League, created by Jack Kirby in 1971.

Scott Free (Miracle) is convinced along with Oberon and Big Barda to go back into show business by perfoming an act at a nearly bankrupt circus; Oberon learns about its bankruptcy from ringmaster Mr. Doodah, who shows him the state of Felicia, the circus fat lady, as an example. When the circus goes back in business, Felicia claims to have gained 20lb, though the illustration suggests otherwise.