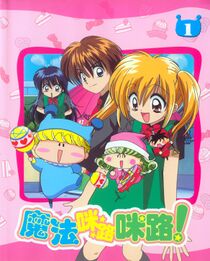 Mirumo de Pon! (Mirmo! in the dub) is a manga series created by Hiromu Shinozuka. It was serialized in Ciao magazine and later published in twelve volumes by Shogakukan. It also has an anime adaptation by Studio Hibari entitled Wagamama Fairy: Mirumo de Pon! The story centers around eighth-grader Kaede Minami and Mirumo, a love fairy ("muglox") and prince who ran away to avoid an arranged marriage.

Kaede tries to lose weight, but Azumi and Yashichi send her cakes (of which Mirumo also eats) to hamper her. They both gain weight, but only Mirumo's is visible. They manage to work it off in the end. Azumi and Yashichi also end up in the same situation thanks to Kaede rejecting their food, leaving them to eat it themselves.

Azumi and Yashichi have to eat a large bowl of noodles as part of the game.