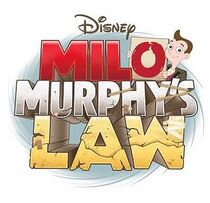 Milo Murphy's Law is an American animated television series that was created by Dan Povenmire and Jeff "Swampy" Marsh and premiered in October 2016.

The series focuses on the titular character Milo Murphy, descendant of Edward A. Murphy Jr., making him subject to Murphy's Law. Naturally, every day is complete chaos, with nuclear explosions, burning buildings, and llama stampedes around every corner. Somehow, Milo manages to stay delightfully optimistic, which helps him retain the motivation to ride out these crazy episodes. Meanwhile, two time travelers named Dakota and Cavendish have the sworn duty of saving the world from a dark and inevitable future where pistachios cease to exist.

The show also shares the same universe as Dan and Swampy's other show, Phineas and Ferb. The beginning of the second season featured a crossover between the two, leading to characters from the previous series becoming recurring characters in this one.

Everything at Milo Murphy's birthday goes according to plan, until Diogee gets into the cake and ice cream.

Dakota lures a flock of crows to pistachio plants using limburger sandwiches, but they get too full to eat the nuts.

Doofenshmirtz and Dakota go to Slushy Dawg and gorge on tons of food, eating away their feelings over the loss of their respective partners, Perry and Cavendish.