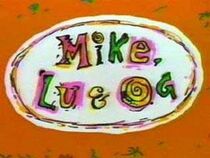 Mike, Lu & Og is a Cartoon Network series from 1999 created by Mikhail Shindel, Mikhail Aldashin and Charles Swenson. It is set on the fictional island of Albonquetine, where the foreign exchange student Mike, self-proclaimed princess Lu, and boy genius Og have many adventures.

Lu blows up an Action Guy balloon, but the air goes back into her.

While searching for snakes to use in the fashion show, Alfred gets eaten by one.

While everyone awaits the arrival of the king of England, Old Queeks eats from the meal that was prepared.