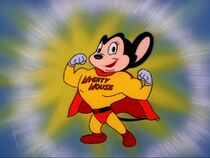 Mighty Mouse as he appears in The New Adventures.

Mighty Mouse is a cartoon character created by Paul Terry at his Terrytoons studio, appearing in shorts from 1942 to 1961 and having a history of television programming from 1955 to 1988, the third and final series being Ralph Bakshi's short-lived Mighty Mouse: The New Adventures. The character is a superhero mouse, bearing a similar appearance to Mickey Mouse, originally created as a parody of Superman.

This short was storyboarded in 1964, but never produced.

A housecat named Puffy grows tall in the fashion of King-Size Canary after eating food affected by a "planetary harmonic convergence".

Mighty Mouse has a nightmare parodying The Honeymooners about married life with Pearl Pureheart. When Pearl appears she has gained weight and become an overweight giant.