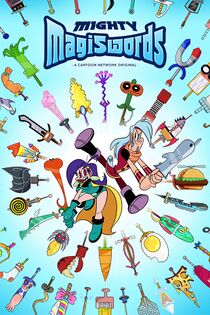 Mighty Magiswords is a Cartoon Network series by Kyle A. Carrozza. It began in 2015 as a web series and interactive game on the app Cartoon Network Anything. In 2016, it was given a TV series. The show follows Vambre and Prohyas, siblings of "Warriors for Hire" who go on quests and adventures to find magical swords called Magiswords.

The Desolation of Grup (E02)[edit]

To vanquish Grup, Vambre and Prohyas challenge him to contests, including a watermelon eating contest in which he sucks up three melons through a straw.

Vambre and Prohyas flash back to an "incident at the bazaar" where they ate too much fair food and were unable to defend the stalls against marauding pirates.

Neddy's fluids are sucked out by a leech, but Prohyas uses Dolphin Magisword to fill him with water. Later, Neddy devours the sea creatures Man Fish called upon.

The two Trollblins accidentally attacking Kotassia stuff themselves with the feast provided by the Warriros with their Food related magiswords, falling asleep with big stuffed guts.

When doing the quest with the Excaliburger Magisword, the player has to shoot burgers at crows, making them too bloated to fly.