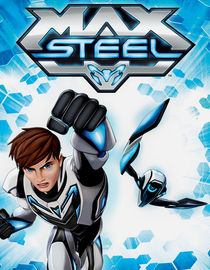 Max Steel is an animated series made by Mattel, Nerd Corps Entertainment, and FreemantleMedia. It runs on Disney XD. The show also shares its name with an earlier cartoon from 2000 and a Mattel action figure.

Maxwell McGrath moves with his mother to Copper Canyon, where he discovers he generates a power called TURBO energy. He joins N-TEK and teams up with Steel, an Ultra-Link who helps keep Max's power under control. Together, they battle Trans-Human Industries, which is led by Miles Dredd, who wants to conquer the world by using TURBO energy.

Steel accidently messes up Extroyer's Ultra-Link, causing him to transform randomly until finally changing into a giant cobra. Steel then tricks Extroyer into swallowing him while holding an explosive.

Max Steel gets swallowed whole Extroyer as a T-Rex, but not before getting an explosive causing the same belly expansion pain he had back in Scrambled.