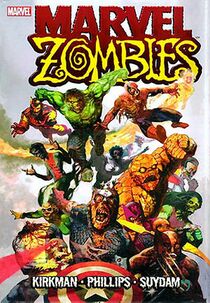 Marvel Zombies is a metaseries from Marvel Comics that began in 2005. It also stems from an arc of Ultimate Fantastic Four. On an alternate Earth (Earth-2149), an alien virus has transformed many heroes and villains into zombies. Despite retaining their personalities, they are constantly driven by a hunger for flesh, and try to find new sources to feed on.

After the zombies eat Magneto, the Hulk turns back into Bruce Banner, with his stomach swollen from what the Hulk ate.

Zombie Spider-Man arrives on what is designated Earth-Z and attacks the Sinister Six. Sandman escapes and encounters the Earth-Z Spider-Man. Thinking he is the zombie, Sandman brutally beats him, then forces himself down his throat, bursting him from inside.