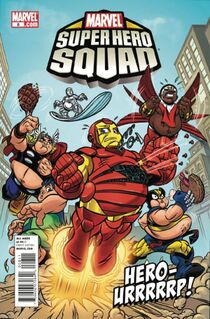 Marvel Super Hero Squad is two comic book series based on the Hasbro toy line of the same name; a one-shot comic was published with only four issues from September to December 2009, while a follow-up miniseries named Super Hero Squad lasted thirteen issues from January to December 2010. Both series portray members of the Avengers and X-Men along with other Marvel superheroes with stylized, cartoonish designs and a more comedic and child-friendly tone.

The Blob touches a Fractal that makes him swap weight with several members of the Super Hero Squad.