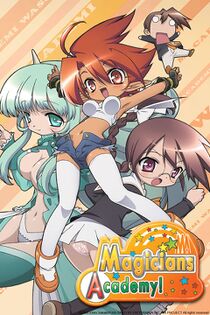 Magician's Academy is a 12-episode anime series based on the light novel of the same name by Ichirō Sakaki, airing from October to December in 2008. It is about the adventures of a boy named Takuto Hasegawa, who attends schools in two worlds - a regular school in the human world, and an academy for magicians in a magical world.

Falcé sips a drink in her miniature form, bloating up easily.