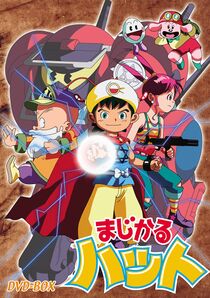 Magical Hat is an anime series produced by Studio Pierrot that lasted from October 1989 to July 1990 with 33 episodes produced.

The hero is a young boy named Hat, descendant of a hero who defeated the evil king of Devildom with a supernatural power and sealed Devildom under the Uson Island. His parents have researched devildom, but Hat loses them when an earthquake sends him falling down into the hole and into Devildom, where the king has regained his strength. With the help of his partners, including the magenta-haired teenager named Spin, he must stop the king from his new reign once and for all.

The heroes go to an island and find that the inhabitants of a town there are incredibly fat thanks a benefactor known as Mr Otu making all the food free. Otu is actually a demon whose plan is to convert the best fattened warriors into brainwashed muscle-bound soldiers for a demon army. The only person around not affected by this is the muscular Peony Bo who goes for natural food and tries to prevent Hat and co from falling into Otu's trap. When at a tournament on the isand, Hat participates and comes across Peony Bo again. The heroes are then invited to Otu's castle, where Hat and Spin unintentionally fall for his trap for them, a bunch of thousand-calorie eggs that swell them up immensely. Unable to properly fight, they try to retreat but wind up locked up.

Poeny Bo rescues Hat and Spin, and after a failed attempt at shedding the weight off through exercise, they find out that the garigari grass can solve their problems. They find the grass Peonyo Bo's family keep in case of such emergencies. Since there's only enough for one person to take, Hat is given it since his powers are needed to save the day, though it causes him to go into a deep sleep before the weight drops off. When Otu is defeated, his own piece of garigari grass is revealed with seeds that can be used to help slim down everyone who's been fattened up.