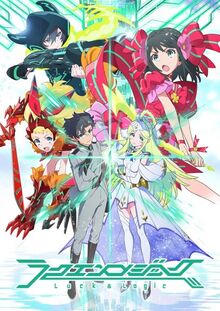 Luck & Logic is a media franchise created by Bushiroad in collaboration with a few other companies. It consists of a trading card game, as well as an anime adaptation by Doga Kobo that began on January 9, 2016.

The series takes place in a world where humans and gods (known as "Foreigners") co-exist. Some Foreigners are more dangerous than others, and are to be defeated by humans with special abilities known as Logicalists. The series follows a group of friends on their quest to stop a foreigner known as Lucifer.

Quetzalcoatl is shown to be stuffed after eating too much of Chloe's pizzas. As a result, Chloe decides to hit him a lot, which causes him to throw all the pizza up.