Lu Over the Wall 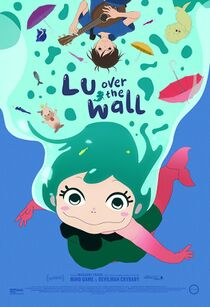 Lu Over the Wall (Yoake Tsugeru Rū no Uta) is a Japanese fantasy film directed by Masaaki Yuasa and released in 2017. Kai Ashimoto is a middle schooler living in the fishing village of Hinashi Town. He sulks about his divorced parents and school life, only feeling joy through uploading his own songs to the internet. His classmates invite him to join their band and they happen to meet Lu, a mermaid (actually ningyo) who is attracted to their music. Kai spends time with her and starts being able to speak his thoughts. However, the townsfolk believe that mermaids bring disaster, causing trouble between them and Lu.

When Lu shows Kai under the sea, she gives him air so he doesn't drown.

Later, the dogs Lu turned into mermaids feed on the villagers' fish.