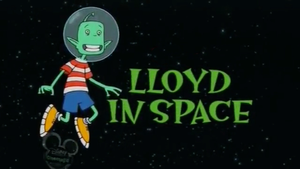 Lloyd in Space in an American animated cartoon series created by Paul Germain and Joe Ansolabehere and produced by Walt Disney Television Animation which premiered on ABC in February 2001 and ran until February 2004 with limited subsequent reruns on Toon Disney. The show’s premise takes place in the distant future aboard Intrepidville, a vast space station that serves as a home and community to various intergalactic lifeforms. Among them is Lloyd Nebulon, a teenage alien boy who often accidentally winds up causing trouble alongside his friends from school, but in doing so learns valuable life lessons from his mistakes.

Lloyd and Eddie briefly appear stuffed from eating pizza while taking advantage of the fact that everyone else believes they’re trapped inside the wormhole and need that food to survive.

While playing together with Kurt, Francine uses her telekinetic powers to inflate him like a balloon.

In a belching contest with the boys, Zoit briefly puffs up before letting out a burp that echoes all over the station.