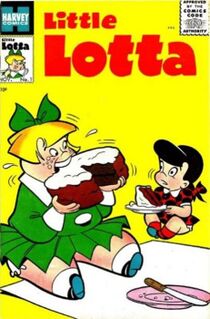 Little Lotta was one of the 'Harvey Girls', debuting in a back-page feature in an issue of Little Dot and earning her own comic book series from 1955 to 1976, returning from 1992 to 1993. Her stories revolve around her gluttony, hence her weight, as well as her superhuman strength obtained from her appetite.

Fearfully imagining how much heavier she could be at age 22, Lotta sees a fortune teller who transports her and Dot to a fabricated future where adult Lotta is thin and about to be married while adult Dot turns out to be overweight.

Lotta eats several boxes of marshmallows, which puffs out her stomach and makes a boy accidentally bounce off her.

Lotta treats herself to four steak dinners with the money she earned from babysitting.

While on a diet, Lotta gets an incorrect reading from a malfunctioning scale that makes her think she's gained weight despite not eating anything. She imagines herself winding up even bigger if she continues not to eat.

Lotta is too heavy to ride Tap-Toe, the pony she won from a slogan contest, so she fattens him up with food from her refrigerator.