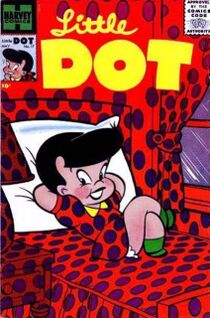 Little Dot, a character obsessed with everything resembling dots, was one of the "Harvey Girls" and was seen in comics published from 1949 to 1982. These comics relied more on slapstick and repetitive humor than those of Little Audrey.

Little Dot is sleeping with Little Lotta. At 1am, they start feeling sick, but as it turns out the next morning they seem to have switched body sizes and personalities, so Lotta is short and thin while Dot is large.