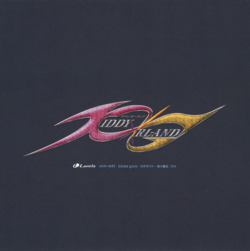 Kiddy GiRL-AND (キディ・ガーランド, Kidi Gārando) is a 2009 sequel to the science fiction anime series Kiddy Grade, created by gímik and Satelight and directed by Keiji Gotoh. The manga adaptation Kiddy Girl-and Pure (キディ・ガーランド ぴゅあ, Kidi Gārando Pyua), illustrated by Yukari Higa, ran in Comp Ace and was released as two collected volumes. ES members Éclair and Lumière once were involved in a battle to decide the fate of the galaxy. They prevailed and peace was restored to the galaxy. Now, 25 years later, the galaxy once again stands on the brink of chaos. This conflict will see the dawn of two new heroines; Ascoeur and Q-feuille. The two girls work for the galactic government known as GTO, as they are training to become members of ES.

Rubis gets a somewhat bloated belly after eating dinner given to her by a woman named Core.