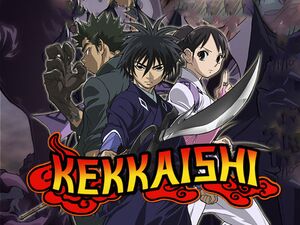 Kekkaishi is an anime TV series based on the manga of the same name written by Yellow Tanabe. The anime adaptation was produced by Sunrise Inc. and ran from October 2006 to February 2008. Like the manga, the show’s premise follows Yoshimori Sumimura and Tokine Yukimura, present-day heirs of the Hazama clan that are tasked with the sacred duty of protecting the grounds of Karasumori from intruding ayakashi.

While at Toshimori’s house, Gaku and Taichi eat an entire cake prepared by Yoshimori with Taichi briefly appearing visibly stuffed.