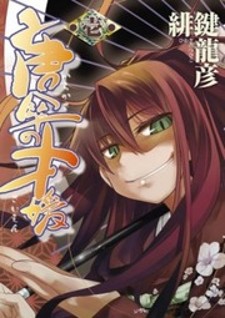 Karakasa no Saien (唐傘の才媛) is a Japanese manga written and illustrated by Hikagi Tatsuhiko. It tells the story of Rokusuke Ibusuki and his time at a magical inn. It was serialized in the seinen magazine Dengeki Kuro Maoh and was later compiled into two volumes.

In the final story arc of the series, Rokusuke attempts to get out of his contract for working at the inn by sacrificing Otome Hanabusa (who is unconscious through the proceedings) to the inn's owner, the goddess Marie Hankinton.

In chapter 11, Rokusuke backs out at the last minute, but Marie still insists on going through with the sacrifice. Despite the protests of Rokusuke and Beni Mizuochi, the inn's manager, Marie takes the still unconscious Otome and swallows her whole.

Otome later awakens and cuts her way out of Marie's stomach.