Journey to the West (2010 Animated Edition) 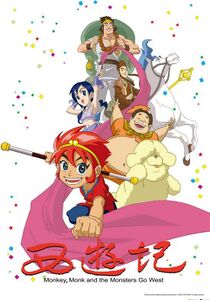 Journey to the West (more distinguishably referred to as: Monkey, Monk, and the Monsters Go West) is Chinese animated adaptation of the famous novel of the same name, which ran from June 2010 to 2015 with a total of 52 episodes by Jiangsu Ciwen Ziguang Digital TV Co., Ltd. This particular adaptation is rather parodic in nature, and borrows many design and animation influences from Japanese anime in an attempt to better appeal to children.

Due to a lack of activity recently, the gang have all put on weight by the start of the episode, which is then lost later on when they’re shown exercising.