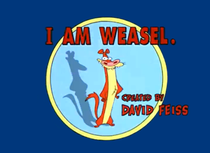 I Am Weasel is a Cartoon Network animated series, created by David Feiss. Spun off from Feiss' earlier series, Cow and Chicken, it had aired 79 episodes during its original run between 1997 to 2000, each chronicling the misadventures of multitalented celebrity and intellectual I. M. Weasel and his dimwitted companion, I.R. Baboon.

In a crossover episode with Cow & Chicken, Cow feeds Weasel lots of pies after managing to fish him out of her television. Unfortunately, this makes him too fat to fit back inside the TV.

I. R. Baboon spends most of his time on screen devouring the flora and buildings of the dessert island he and I.M. Weasel had found themselves stranded on, growing fatter and fatter.

During his inspection of the "unsinkable" S.S. Flaming Weenie, I. M. Weasel is shocked to see the bulkhead is leaking uncontrollably! He attempts to bail the water out, opting to drink the water straight from the leak to spit it over the side, a feat which causes him to bloat up fast.

In this episode, I.R. Baboon is riding I.M, Weasel like a motorcycle. They wind up going so fast, they break through the speed of 'light' and in to the speed of 'heavy'.

I.R. Baboon wishes for a coyote and cheese sandwich, then it proceeds to eat him and I. M. Weasel.