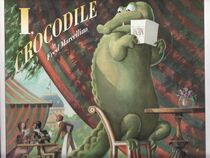 I, Crocodile is a children's book written by Fred Marcellino, published in September 2002 and adapted into an animated short film by Michael Sporn a month later. The story involves a gluttonous crocodile that is abducted by Napoleon from Egypt and taken to Paris. He is seen as a popular attraction but is quickly ignored as new attractions become more interesting. When he is about to be put on the menu, he must find a way to escape.

At the end of the book, the crocodile escapes through a manhole into the sewers of Paris, viewing it as a sanctuary. However, he quickly starts getting hungry. When he spots a crowd near the manhole, he drags down a lady dressed in pink and swallows her. On the very last page, he is seen with a distended belly, picking his teeth with the feather that used to be on her hat.