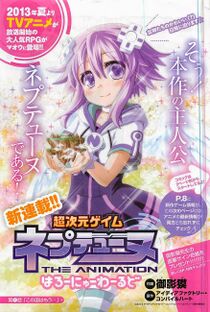 A parody of the seventh generation console wars, the series is about four "Goddesses" reigning over countries in a world named Gamindustri, where each country is named after a game console. These Goddesses sign a friendship treaty that prevents forceful taking of Share energy.

Thanks for the meal (Volume 1, Chapter 5)[edit]