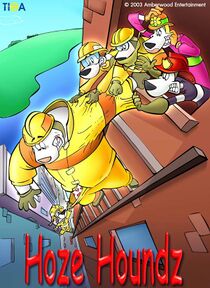 Hoze Houndz is a 1999 Canadian animated series that follows the misadventures of six dalmatians who work as fire fighters in the fictional town of Bonehead Hollow.

Hozer, in his firefighter suit, gets inflated by a hose and floats around the building.

Squirt, during his hallucination as the hero of his favorite video game, defeats one of the lizard mooks by inflating it with his fire hose.

Squirt eats some magical food that causes him to gain weight and inflate up to the ceiling.

When Crystal becomes a pitcher for a baseball team, she starts gorging on donuts, resulting in a "baseball gut".

Steamer challenges Bottomless Lou to a hot dog eating contest and ends up completely stuffed at the end. Surprisingly, he loses to the still-skinny Lou.

The alien Yorgone decides to enter a sumo tournament, thinking if he won, he would become supreme ruler of Earth. He got Steamer to coach him and was introduced to fried chicken, which got him fat fast. After finding out that all he needed was the deep-fry batter, he set his ray gun to deep fry and went on a binge. In no time, Yorgone is twice as big as Steamer and wins the tournament. However, when he finds out that he was wrong about becoming supreme ruler, he decides to deep-fry and eat the entire world out of spite. When Steamer defeats him in a sumo match, all of that deep-fried food finally caught up to Yorgone, and he explodes.

When Steamer is given the power to turn anything into chocolate by Bubbles O' Shea, he accidentally turns Squirt's gold bars into chocolate. Before Steamer gives up the power and everything turns back to normal, Bubbles O'Shea eats all of Squirt's "profits".

While visiting an all-girls school, Squirt is overfed crumpets by the female students and gains a tremendous amount of weight.

A running water pipe is jammed into Steamer's mouth due to his bad luck, and he swells up with water.

A super skinny supermodel-turned-villain named Paisley Bellbottom steals all of the candy in Bonehead Hollow for himself, having been fed up with eating nothing but celery sticks and carrots all his life. When he finally appears in person, he is fatter than Steamer. When Hozer escapes from his whipped cream ray, Paisley snatches the controls away from his henchman and force-feeds himself with it, swelling up even more.

Trapped in a room that's filling up with pudding fat, Hozer escapes by eating it all. He finds his weight gain to be very useful in saving the day by squashing the villain, his henchmen, and the entire lab.