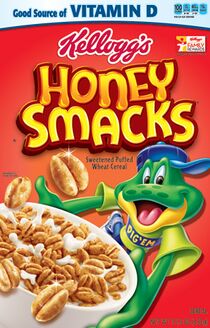 Honey Smacks, branded internationally as Smacks, is a sweetened puffed wheat cereal originally introduced by the Kellogg Company in the United States in 1953. Its current mascot is Dig'Em, an anthropomorphic frog who has a huge craving for the cereal.

Dig'Em gets distracted when he and Coco Monkey are blowing up the free balloons included in packs of Smacks and Choco Krispies, causing him to blow up instead.