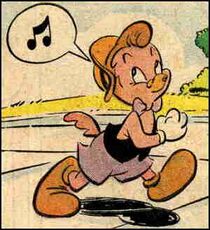 Homer Pigeon is a cartoon character created by Walter Lantz. Making his first appearance in 1942, he lasted through four cartoons until 1964 and several comics until 1973. He was never seen again since, save for a cameo appearance in Who Framed Roger Rabbit.

Homer inflates himself with a balloon and compressed air to try and make himself look like a convincing carrier pigeon.