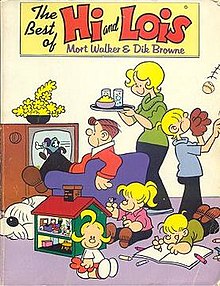 Hi and Lois is an American comic strip series created by Mort Walker which debuted in October 1954 and is still currently in syndication. The strip's premise focuses on the Flagstons, a suburban family consisting of the titular parents and their four children: Chip, Dot, Ditto, and Trixie. The strip also takes place in the same continuity as Walker's other comic series Beetle Bailey as referenced by the fact that Lois is Beetle's sister.

Lois asks Hi how he hurt his back, and he replies he did so giving the baby Trixie a piggyback ride. Trixie is then shown with an enlarged stomach, monologuing that she ought to cut back on the animal crackers.