Hells Angels is a manga created by Sin'Ichi Hiromoto that was published in Ultra Jump from August 2002 to April 2004. It was adapted into an animated feature film by Madhouse, Hells, released on October 18, 2008. 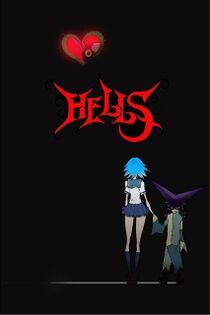 It follows a teenage girl named Rinne Amagane who dies on her way to school and ends up in another school, in the underworld. While down there, she learns to get along with her new classmates, who are all demons.