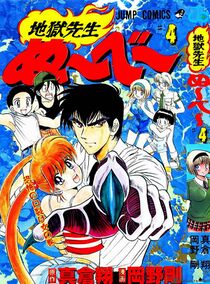 Hell Teacher Nūbē is a manga series that lasted with 276 chapters from September 1993 to May 1999, created by Shō Makura and Takeshi Okano originally for Weekly Shōnen Jump. An anime series was produced from April 1996 to August 1997.

The series centers around Meisuke Nueno, better known as Nūbē, an exorcist whose left hand has power borrowed from a demon and who will protect the town of Dōmori whenever evil spirits and other supernatural threats attack, and acts as a teacher for Dōmori Elementary when the town is safe.

Kyoko is bloated with water after Nūbē rescues her from drowning.

Nūbē investigates a woman infected by nebutori, the disease that can make women grow fat as they sleep.

Kyoko, who is cautious about her weight, is possessed by the spirit of a small child who appears as a mouth on the back of a specific woman's head and eats as much as it can manage, the food ending up in the woman's belly.