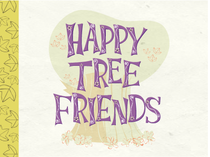 Happy Tree Friends is an American black comedy cartoon which was first created in 1999 by Kenn Navarro and Rhode Montijo. It's also a gore cartoon and it features cuddly cute anthropomorphic animals in a kids cartoon style, each one with a different personality. They live in the forest and, while doing their daily routines, they can suffer a gory, painful and violent death when they less expect it! It features over 80 web episodes, 39 half-hour long TV episodes which split into three seven-minute-long segments, over 10 irregular episodes, 9 Christmas-themed shorts named "Kringles", 3 spin-offs that receive the name of "Ka-Pow!", over 10 shorts which take place in a cinema called Breaks and 11 shorts dubbed as Smoochies.

Nutty is stealing an armful of sweets at a convenience store and spots a slushy machine, leading to him drinking directly from the dispenser nozzle. However, not only does he drink enough to swell his body, but his lips get frozen to the nozzle. After painfully ripping them off, Nutty stumbles back into sharp metal point used for holding bagged candy, puncturing him and sending him flying around the store.

Petunia is swallowed by a snake and Lumpy goes to help her, only to be swallowed also. He rips the snake open with a pen to escape, but Petunia is already partially digested.

After getting a vacuum's hose caught in her eye-socket, Petunia begins to have her insides sucked out. When Lammy tries to save her by flipping the switch on the vacuum to "Blow", Petunia quickly inflates to triple her original size and finally explodes.

Lumpy, a vampire in this episode, drinks all the blood inside an ambulance truck. This makes him too bloated to escape the sunrise, which destroys him.

In the "Mix" option, Sniffles drinks a growth concoction instead of pouring it on him, attempting to grow enormous, but his plan backfires when his guts start growing uncontrollably and burst out of his body. They continue growing until they fill the entire screen and crush Sniffles to death.

In the "Corn" option, Pop eats some corn on the cob. A spark from the grill then lands on him. Pop puts out the fire, but the heat makes the corn pop inside him, causing him to swell up and die.

Lumpy demonstrates how to administer oxygen on Toothy, but Toothy ends up inflating and floats away. He later pops on a flagpole.

While creating Flippy's birthday party, Flaky suffers from her peanut allergy and swells up.

Disco Bear sees that he is overweight, even though it is noticeable for only two scenes.

Russell expands from an air blast Lumpy pumped through the air tube and suffers decompression, causing his muscles to expand through his body, and break through his skin.

Nutty sucks the honey from a beehive, gets his face covered in it, and unknowingly wipes it off with a grizzly bear's fur. The bear slices him for it.