Happily Ever After: Fairy Tales for Every Child 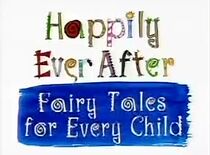 Happily Ever After: Fairy Tales for Every Child is an animated anthology series that originally ran on HBO and HBO Family from 1995 to 2000, continuing to rerun since then. It retells fairy tales with feminism and/or diversity, casting celebrities of various cultures and backgrounds as the voices of the characters.

The wolf imagines Little Red Happy Coat fatter when she says that Poa Poa weighs four times as much as her.

The wolf eats Poa Poa and later Little Red Happy Coat, but they are freed after he drinks Mr. Sung's herbal remedy.

One of the three pigs who attends Porkchop's camp is Barbie Q. Pepper, a plus-size pig who becomes a model but is eventually fired when she loses weight.