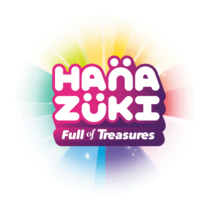 Hanazuki: Full of Treasures is a web series made by Hasbro and Titmouse that debuted in January 2017. It is based on concepts from Hanneke Metselaar and Nicola Stumpo. Set in a fictional galaxy, the show follows Hanazuki, a being called a Moonflower. She uses her emotion-based powers to grow Treasure Trees and protect her moon from the "Big Bad", a dark cloud that drains life and color.

Hanazuki accidently flattens Blue Hemka and tries to restore him by blowing him up.