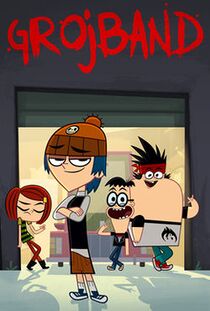 Grojband is a Canadian animated series that premiered in North America in 2013. It follows an indie rock band led by Corey as they try to become famous. They often get lyrical inspiration from the diary entries of Corey's sister Trina, who writes in it when extremely emotional.

Kin and Kon inflate like balloons with their farts and fly away.

Kin tells Corey that the effects of his shrink ray only last for an hour, and when Kon (who is inside Trina) reverts to his normal size, Trina will explode.