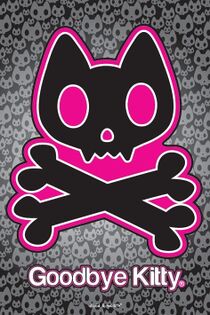 Goodbye Kitty is a web series conceived by Todd Goldman and animated by Mondo Media. It revolves around two cats, Black Kitty and White Kitty. Because the girl who owns them gives more love and attention to White Kitty, Black Kitty tries to kill him with creative methods, only for them to backfire horribly.