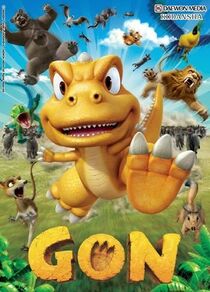 Gon is the title character from a manga created by Masashi Tanaka. The series was made into a CG animated television series that aired in Japan from April 2, 2012 to March 25, 2013. There are also two video games, and he is a playable character in Tekken 3.

The series follows the titular character Gon, a small dinosaur who somehow lived into the modern era. Contrary to his size, he is very powerful and durable. He can be short-tempered, but still has a good heart. He usually goes on adventures, which get the other animals involved.

Gon drinks all the water in an oasis, leaving none for anyone else.

Gon has a bug in his nose and tries whatever he can to get it out, including shooting water through his nose.

A skunk needs help to defeat a Skunk King, but his smell is too strong. Gon comes up with a plan to eat all the stinky foods they can find, resulting in notable bloating in order to work on the smell.

After seeing a hippo eating huge amounts of food, Gon competitive nature has him trying to out eat the hippo, which turns into a competition with his and the hippos smaller son. This results in Gon visibly stuffed as he tries to keep up with the larger hippo, as well as having to work off what he has eaten and stuff himself again in the attempt to out eat the competition. The competition ends in a tie when the last edible thing in sight, a mushroom, is taken by a cute baby bear who refuses to give it up, and whose crying is one of the only things Gon can't stand.

Ussu, the boss bear of the forest who is often on the receiving end of Gon's frustrations, has put on a lot of weight from eating mushrooms and being used as Gon's bed. After receiving a beat down from rival wolves, Gon resolves to help Ussa get back in shape through rigorous exercise. They are successful, and Ussa quickly gets back on top, only now Gon finds his favorite bed less comfortable without a soft belly, and proceeds to try and stuff the bear again.