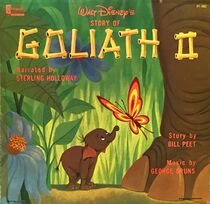 Goliath II is a Disney short that was released on January 21, 1960. It is also the first Disney film to make full use of xerography. The short is about a tiny elephant who longs for respect from his father.

When Goliath II is caught by Raja the tiger at night, his mother saves him and throws Raja into the crocodile's mouth, after which he escapes and flees to parts unknown.