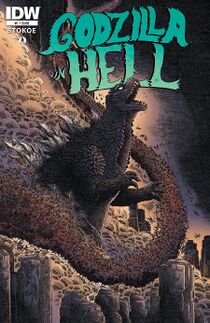 Godzilla in Hell is a five-issue miniseries released in 2015. Each issue is written and illustrated by different artists. Godzilla falls down into Hell and travels through it to escape, fighting demonic forces that confront him.

After being pushed off the mountain by the Hell Gate Guardian, Godzilla is devoured by a swarm of Hellbats. However, they end up reforming his body.