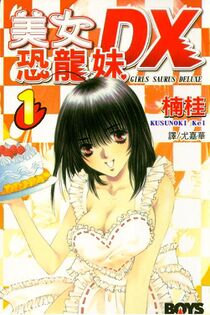 Girls Saurus Deluxe is a sequel series to the manga Girls Saurus, created by Kei Kusunoki, that lasted from August 2003 to December 2008 with 10 volumes, whereas the former lasted from March to December 2002 with only 3 volumes. It was serialized in the Monthly Sunday Gene-X magazine, and is targeted to an older age group than Girls Saurus.

The story of both mangas centers around a 16 year old boy named Shingo Chiryu, who has developed a fear of all women ever since he was crushed by a very large one named Haruka Nishiharu, as he is sent to an all-girls boxing club and sees Nishiharu for the first time since then, only she has slimmed down drastically.

Arahata Tsuyoshi is a character with a fetish for fat girls, who would often try to fatten Nishiharu up with sweets. In this chapter, Nishiharu calls on the "4,000 year old Chinese secret" by instantly turning as fat as she used to be, mockingly appealing to Arahata. Arahata only prefers girls with "real fat".