Gensou Mangekyou: The Memories of Phantasm 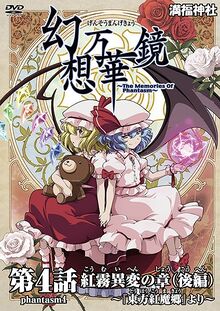 Gensou Mangekyou: The Memories of Phantasm is a fan-made animated video series, produced by Manpuku Jinja, and is based on the Touhou Project video game series. It consists of four episodes, running from August 12, 2011 till November 24, 2014. The first episode is based on the game Embodiment of Scarlet Devil and Perfect Cherry Blossom, while the second, third and fourth are based on Subterranean Animism.

The ghost Yuyuko Saigyouji has stuffed herself full at the celebration party.