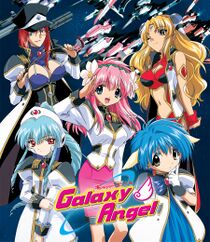 Galaxy Angel is an anime series based on the video games of the same name, having an alternate universe and a greater focus on comedy. The show ran from April 2001 to September 2004 and also got a sequel series. It follows the Angel Brigade, a part of the Transbaal Empire military. Their task is to search the universe for Lost Technology, which hold unknown power, but they always get into crazy situations.

Ranpha takes a break from her diet to gorge on fried chicken.

As the Angels fight each other with their superpowers, Ranpha (who can turn into a pig) turns into a fatter pig when fighting Forte, only to be batted away easily.

After spending the episode losing enough weight for their evacuation exercise, the Angels are fed nourishment by the escape pod, making them fat.

Milfeulle bakes numerous cakes for her recruit, who gets quite stuffed.

Chitose uses the lost technology rice cooker to turn her midsection into a baseball glove and catch some falling people.

Wish Bound Together with Eggs (E25)[edit]

Chitose uses a lost technology notebook that makes whatever she writes come true, but it makes her weaker and skinnier. She tries to undo this with the notebook, but ends up so large that she becomes a black hole.