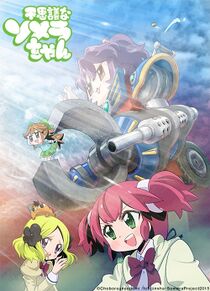 Fushigi na Somera-chan (also known as Magical Somera-chan) is a 4-koma manga series that started publishing in 2009 in Manga Palette Lite but ended in 2011 due to the cancellation of said magazine. It was later rebooted during 2015 in the Manga 4-koma Palette magazine. An anime series based off both of the manga began airing in October 2015.

It focuses on Somera Nonomoto, a girl who wielded special martial arts powers from her (currently deceased) mother, and her friends Kukuru Nonomoto, Shizuku Tendo, and Ai Matsushima as they go through bizarre mishaps and adventures.

Ai appears stuffed after eating the supposed last supper they would have before the meteorite's eventual strike.