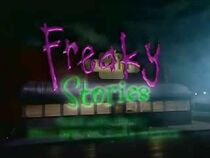 Freaky Stories is a Canadian animated anthology show developed by Steve Schnier and John A. Delmage, lasting from October 1997 to October 2000. Hosted by two animatronic insects, Larry de Bug and Maurice, the stories are all based on urban legends that children are likely to believe.

Five Stories that is about food and people eating them.

After a waiter turn criminal (who refuses to eat any of the jail food) loses a lot of weight, he regains all his weight after learning the food he eats wasn't really food.

Four Stories that revolve around one's look and how they take it too fair.

The fashion model takes some diet pills, but when mixed with water they make her body expand.