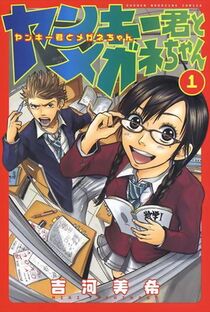 Flunk Punk Rumble (Yankee-kun to Megane-chan in Japan) is a manga by Miki Yoshikawa. Originally a three-part short story, it became a series and was published in Kodansha's Weekly Shōnen Magazine from October 18, 2006 to May 18, 2011. Daichi Shinagawa is a delinquent who doesn't care much for his high school life. Hana Adachi, class representative and former delinquent, aims to help him be more involved in school so that he doesn't keep making the mistakes she made. The adventures of these two and their classmates are followed.